ABSTRACT:
The information and communications technology (ICT) world is “addicted” to dysfunctional behavior and the problem is spreading globally. The sad truth is that the parties in the ICT relationship (the customer and the supplier) are largely co-dependent on a pattern of dysfunction characterized by ineffective communication, fixed price contracts with changing requirements, and eroding trust. This article focuses specifically on the northernSCOPE TM 12-step process for ICT program recovery.

For more information on northernSCOPE(TM) visit www.fisma.fi (in English pages) and for upcoming training in Tampa, Florida  — April 26-30, 2010, visit www.qualityplustech.com.

To your successful projects!

“Don’t waste even one heartbeat on things that don’t matter.”  Anonymous

This quotation should be the mantra of software development – if only we could figure out what “in the customer’s eyes” doesn’t matter!

What’s going on? With 60-99% of defects attributable to poor requirements, and 45% of development effort spent on rework, it is clear that somehow the customer side of the house and the development side are out of whack.  Worldwide, we could declare software development as a problem of epidemic proportions – especially as software pervades every aspect of our daily lives.  If we can casually launch a team of scientists to fix an ailing space station on a moment’s notice, and announce medical breakthroughs, surely the brains in software development should make strides in this area.  Take rework for example, currently hovering at an astounding 40% of software development effort – this means that while we do great work Monday to Wednesday every week, the remaining two working days are spent fixing and redoing the very work we just completed. The old adage – “if you don’t have the time to do it right, when will you find the time to do it over?” —  doesn’t seem to hold much water does it when almost half of every week is spent doing costly rework?

Here’s the crux of the situation – it’s not a matter of incompetence!  It’s a matter of the customers not being able to fully articulate what they actually need – and a matter of the suppliers not being able to deliver to requirements that are as sketchy as clouds.  BUT, there’s a solution that’s been successful in Finland and Australia called Scope Management – and I’ve mentioned this many times in the past… stay tuned for more information in the coming posts. And Scope Management training is coming to Tampa, FL in just a few weeks.  More to come!

For more information on northernSCOPE(TM) visit www.fisma.fi (in English pages) and for upcoming training in Florida, visit www.qualityplustech.com.

To your successful projects! 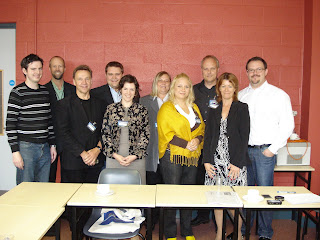 Global software development is the new normal as offshoring, outsourcing, insourcing, farmsourcing, and other forms of software development are no longer a novelty. The variations on the theme are almost endless as the BRIC countries (Brazil, Russia, India, and China) are also in turn finding their own sources of cheap labor in Africa and other developing societies. Latvia, Romania, Slovakia, Estonia and other Baltic countries are often the preferred outsourcing partner for software acquirers in Europe due to their geographic proximity, lower cost of labor, highly qualified workforce, and time zone accessibility. While unusual for North Americans to fret about time zone differences with India – more often the difference is seen as a plus (“we leave them with a problem at the end of our day and it is solved when we arrive to work in the morning”) – Germany and other European nations prefer to outsource software development to Baltic countries because of the four hour time difference they’d experience with India.

Multicultural teams are becoming more common even within our own country as corporations such as Nielsen (aka the Nielsen ratings people) and others hire Indian workers to temporarily relocate to the US to gain the experience before taking the work back offshore to complete in India. As such, the US and Canada are becoming more and more the “melting pots” of folklore fame.

What does all of this mean to professionals unaccustomed to dealing with a variety of cultures in our workspace? The issues are more than a simple fact of ethnicity and differences in geography, and our diversities may surprise you. Diversity in the workplace now spans the following major areas:

– Age – Never before has our workforce featured workers from four generations: Baby boomers, Generation X, Y AND Z. The differences in generational background, values, expectations and entitlement can be vast and without consideration can cause major friction on project teams. This includes viewpoints on taboo subjects such as abortion, gender rights and differences, domestic relationships, career expectations and loyalties, and commitment to working hours.

– Gender – North America and Europe (to a lesser extent) has covered gender relations over the past decade with authenticity and focus through sexual harrassment training and diversity workshops. However, this is not the case for all nationalities where gender treatment may be tied to national or religious cultures. There are nationalities who immigrate to the US for work who refuse to acknowledge or shake hands with a woman in the workplace – this can cause friction on teams – especially when co-located.

– Ethnicity – This is the one most people think of when considering organizational or multicultural work environments. The most common areas to be conscious of and cognizant of differences lies in the “innocent” areas of food and festivals. For further information refer to the seminal works of Geert Hofstede or Fons Trompenaar on multiculturalism.

– Multidisciplinary – Various disciplines involved on project teams can cause more difficulties in terminology than even language. Medical practitioners and software developers (for example) seldom speak the same language yet many of their “TLA’s” (Three Letter Acronyms) may be identical with completely different meanings. An example is AMA which can mean American Medical Association, Alberta Motor Association, and American Management Association. Real life examples on projects is much more pervasive and can cause friction when the acronym meanings are taken for granted.

– First language – in my other blog (http://www.caroldekkers.wordpress.com/) I’ve mentioned how fortunate we in Canada (English Canada that is) and in the USA are to speak English as our first language, especially since it is the international language of business. When working with others whose first language is not English, idioms, dialects, local language usage (British versus Australian versus American versus Canadian forms of English can be VERY different) can cause problems if not dealt with in a considerate manner. For example, even when dealing in English, the term “to table a document” means almost complete opposite ideas in British English versus American English (in the US we mean to put a document aside, whereas in Britain, the term refers to bringing up a document for immediate discussion).

– Taboo subjects – while this item is often related to ethnicity, it is not necessarily so! For example, in the book “American Backlash”, the largest diversity in the United States exists between those who vote and those who do not – not the differences between genders, race, or age! Sensitivity to what will offend a particular group for whatever reason is important to consider when dealing with “multi-cultural” teams regardless of the definition of “CULTURE”.

– Ability to embrace change – again, this may fall along the lines of ethnicity in some cultures, however, the willingness or ability to adapt to or embrace change is much more complicated than simply geographic birthplace. Myers-Briggs assessments, DISC and other personality evaluation models can often shed light into the types of people and their “culture” on project teams.

– Race / color /creed and associated/potential bias – this is often less related to ethnicity than to upbringing. It is interesting to me to read books by a diverse set of authors who uncover various biases in our global societies. It becomes obvious that every nation on earth has an unpublished hierarchy of ethnic respect – in other words, every nation looks at people of other nations in a different way. Americans are lauded in some societies while in others we are thought of as inferior. A colleague from Switzerland working in a middle eastern country cites the hierarchy of preferred consultants as being: United Arab Emirates, Australians, British, Americans, European Union countries, then others. Other countries have their own preferences and biases – and even a short trip to the bookstore or to another country reveals these differences in outlook quickly.

SO- global software development teams are plagued not only with the traditional customer versus developer/supplier crevasses, but also with challenges X many based on the dimensions above.

I hope this provides you with food for thought – in whatever manner you prefer your food! Happy weekend!

Contact Carol for your keynote and speaking needs – she translates technical subjects into easily digestible soundbites – in a humorous and forthright manner. See http://www.caroldekkers.com/ for details of topics and opportunities.